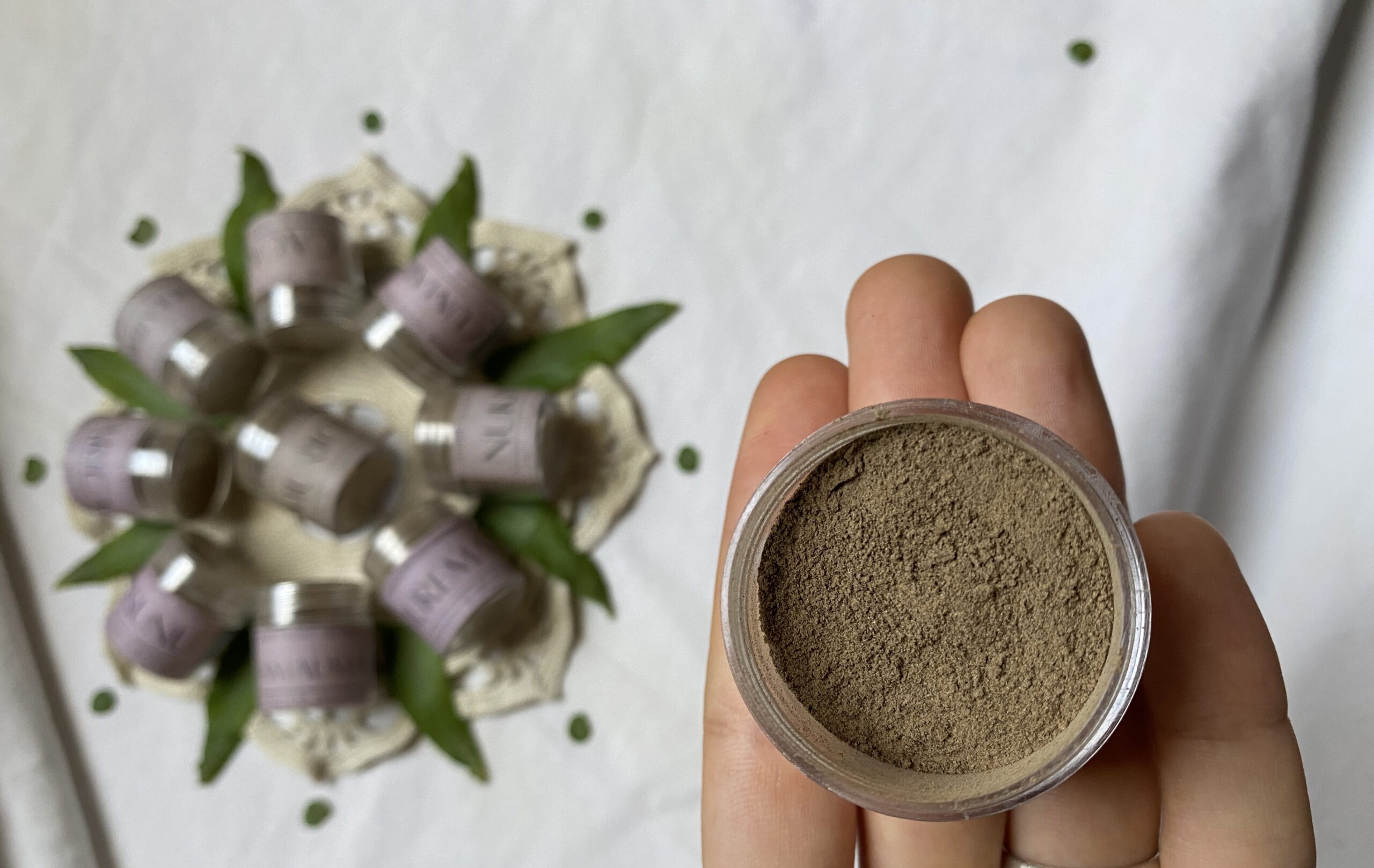 While Rapé is often made of several Amazonian plants, the core of most rapé snuffs is the tobacco species Nicotiana rustica. This Amazonian tobacco, also known as mapacho, is used extensively in tribal rituals and is much stronger than N. tabacum, the type of tobacco found in cigarettes.
In addition to tobacco, rapé usually includes the alkaline ashes of other plants such as cinnamon, tonka bean, clover, banana peel, or mint, but many shamans keep the exact ingredients of their particular rapé a secret.
It is a sacred, deeply healing, powerful, cleansing, and miraculous medicine that is produced by a very sacred and labor-intensive process from a variety of Amazonian medicinal plants, seeds, trees, leaves and other sacred ingredients by indigenous tribes from different South American countries – especially Brazil and Peru.
Traditionally, Rapé is applied using a tool made of wood, bamboo or bone, from which it is blown gradually into both nostrils. Rapé can be applied to itself using a V-shaped tool named Kuripe: one end of which is inserted into the mouth and the other end into the nostril.
The Rapé  is not snorted because it does not make the same path in the brain, nor does it decalcify the pineal gland in that way, therefore, it is essential to have the applicators also with the right disposition, time and place for it.

Set & Setting: How to take Rapè

Every medicinal plant is considered by indigenous tribes as a sacrament and as a prayer or intention. We recommend to use this sacred medicine, Rapé, in an environment that is honoring the plant for its teaching and healing abilities. Incense, crystals, tribal music, and nature, create a perfect space for a meditational and reflective rapé use.
Also, it is very essential to aim your mind and prepare an intention before embracing Rapé; sit in silence and aim your mind before you get started. This intention can be focused on insights, physical healing, energetic healing, or anything that necessitates healing or clarity in your life. Once you found an intention, ask the universe or the spirit world to help you through that process.
We use cookies on our website to give you the most relevant experience by remembering your preferences and repeat visits.
By clicking “Accept”, you consent to the use of cookies and agree to our terms and conditions and privacy policy.
ACCEPT
Manage consent

This website uses cookies to improve your experience while you navigate through the website. Out of these, the cookies that are categorized as necessary are stored on your browser as they are essential for the working of basic functionalities of the website. We also use third-party cookies that help us analyze and understand how you use this website. These cookies will be stored in your browser only with your consent. You also have the option to opt-out of these cookies. But opting out of some of these cookies may affect your browsing experience.
Necessary Always Enabled
Necessary cookies are absolutely essential for the website to function properly. These cookies ensure basic functionalities and security features of the website, anonymously.
Functional
Functional cookies help to perform certain functionalities like sharing the content of the website on social media platforms, collect feedbacks, and other third-party features.
Performance
Performance cookies are used to understand and analyze the key performance indexes of the website which helps in delivering a better user experience for the visitors.
Analytics
Analytical cookies are used to understand how visitors interact with the website. These cookies help provide information on metrics the number of visitors, bounce rate, traffic source, etc.
Advertisement
Advertisement cookies are used to provide visitors with relevant ads and marketing campaigns. These cookies track visitors across websites and collect information to provide customized ads.
Others
Other uncategorized cookies are those that are being analyzed and have not been classified into a category as yet.
SAVE & ACCEPT